Those on the hunt for a healthier and easier way to make crispy fried foods should look no further than the Tower Power Air Fryer XL. This halogen tower cooker has three different modes of cooking and be used to produce a range of delicious foods, in quantities to feed a famished family.

The Tower Air Fryer not only fries, but roasts and even bakes – yes you can bake a cake in the clear bowl and watch it form. When will they get these on Bake Off?

The Tower looks like many other halogen air fryers, because that specific configuration is the most optimum way for convection to occur, without extensive research and development funding to wrap it in a plastic box.

The Tower has a clear, glass bowl which sits on a black, plastic stand. You can add a protective plastic frame around the bowl because the bowl does get hot whilst in use. This protection costs a little bit more, but if you’ve got children or pets it might be worth it for peace of mind.

I like the aesthetic of the clear bowl, topped with the little android-like control centre. It looks as if it should be talking to you as it cooks things. As it stands the controls are simple – and that’s not a bad thing.

Another plus point regarding the cooking bowl is that it is rounded and glass, this removes the crevices which can be so painfully irritating to clean on other fryers. Simply lift it out and soak or pop it in the dishwasher.

There are two dials, one for temperature and one for the timer. These are strictly analogue, which makes the Tower better value than some of the sophisticated and feature-laden air fryers out there at the moment.

The Tower can cook things from 125-200°C with ease, and it does go up to 250°C. And while air fryers are able to cook things from frozen, the Tower goes one further and includes a handy ‘thaw’ setting for things you’d prefer to cook using ‘traditional’ methods.

The timer runs for up to an hour, and will automatically switch off the air fryer when it pings. Not that you’ll need an hour in most instances, the Tower air fryer is a very speedy cooking machine. 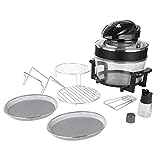 Cooking with the Tower Air Fryer

As standard, in the Tower, you have 12 litres of space to play with. This can be extended by a further five litres should you choose. By adding the extender ring to the top it makes it far easier to cook two different dishes simultaneously. You can manage to do this without the extender, but that little bit of extra room is helpful.

What sets the Tower air fryer apart is the triple threat it brings to your cooking. You can use straight halogen, convection and infrared to get a wholesome brown finish in double-quick time.

I tried to make my favourite, chicken and chips, and was pleasantly surprised at the speed this took. Cook times are slightly increased when you add the extender, but not dramatically.

The Tower comes with an extender ring, two racks of differing heights, two mesh trays which are useful for crisping or cooking lightly oiled food, an oil sprayer, some tongs, a recipe book and a manual. As we pointed out earlier, the protective basket is an added extra.

Conclusions on the Tower Air Fryer

I’d be really pleased if I got this as a bizarre gift from a relative, to be honest. I’m a fan of the ease of use and ease of cleaning. I don’t really use the recipe book provided, the internet is a far better source of knowledge there. But I’ve used all the features of the Tower to good effect, my partner did do the carrot cake baking element I should point out, she said it was easy and the cake was on point.

What is missing is a dehydration setting, this is hampered by the lack of a timer going beyond an hour and a lack of specific temperature control below 75°C. There are mystic ways to hack this recipe though.

All in all this product is a worthy investment, you can cook for a large group quite easily with the extender ring, and you get all the necessary accoutrements in the box – aside from the protective basket but if you’ve read this review instead of skipping to the dazzling conclusion, you’ll know that’s an added extra.

Competitors with bigger profiles like Phillips or Tefal still make good air fryers, but the Tower is a solid budget option with plenty to offer.